All pictures and text on this site are copyrighted ©1982-2019 Alex Peck.  All rights reserve. 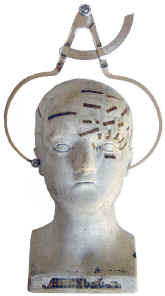 Phrenology was the study of the shape and features of a person's  head to allegedly determine attributes such as character, intelligence, diligence, etc.  While the practice has lost its legitimacy, it did mark the beginning of the inquiry into what part of the brain controls what and of the field of neurology. 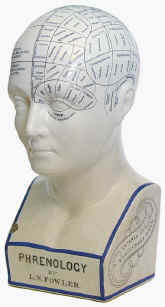 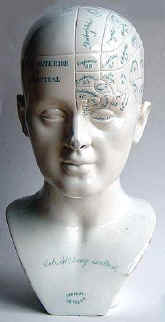 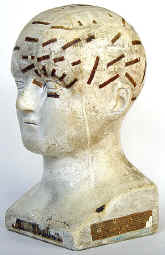 To help with the reading of a subject's head, busts of the ideal head, such as the examples shown here, were made to serve as reference points.  The cranium was divided into various regions of sentiments, and these were labeled.    The best known of these busts is that to the left which was designed by Lorenzo N. Fowler, a prominent practitioner of phrenology in the nineteenth century.  (Similar models were produced for many years and are widely reproduced today.)  The center phrenology head is from Seville, Spain, and the sentiments are in Spanish.  The bust is about life-size and dates to c. 1850.  To the right is an R. Wells 1870s plaster bust from New York.  Note that the sentiments are marked with printed labels that were attached to the head. 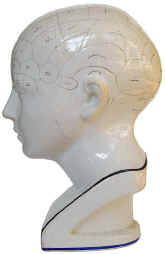 A very rare c. 1830 antique phrenology head, possibly made by Derby porcelain.  The phrenology antique offered here resembles the Gall and Combe type busts seen in their respective publications.  While the Fowler busts of the 1860s and through the later 19th century are more common, this is a scarce porcelain antique phrenology head of an earlier generation.  This dealer is aware of only a few other examples.  30 cm tall. 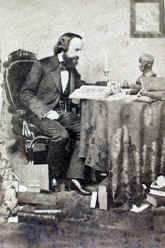 A c. 1860  carte-de-visite thought to be of Lorenzo Niles Fowler (1811-1896), the well-known 19th century phrenologist.  Based initially in New York City, then in London, Fowler read the heads on many of the era's most famous personages, including Walt Whitman, Mark Twain, and Clara Barton.  Note the phrenology head on the table. 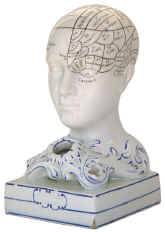 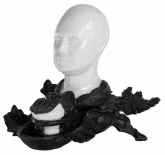 A fine c. 1860s George Washington antique phrenology bust inkwell.  The ink reservoir head of President Washington and the pen dipping cup are opal glass (milk glass).  The stand is cast iron that has been painted black.  Washington's idealized head carries phrenological divisions, each being numbered.  The base is replete with symbolism:  oak leaves indicate fortitude and strength; ivy leaves signify fidelity and tenacity; laurel leaves represent martial victory and success.  The leaves to the sides are shaped to form a cradle for holding pens.  The top of the pen cup lid is decorated with an American eagle within a Federal shield, while the underside reads:  SEE WASHINGTON MANUAL BY // JOHN HECKER, / N.Y.  The front of the glass cup is lettered:  WASHINGTON MANUAL.  The 1866 manual was a guide to understanding the Washington phrenology bust.  The ring that holds the pen cup in place is marked:  PATENTED DEC 11, 1855.  A check of the U.S. patent records reveals United States Patent 13,902 for a self-feeding fountain inkstand that was granted on 11 December 1855 to Charles T. Close, of New York, New York.  The Washington Manual inkstand is 6.5" tall. 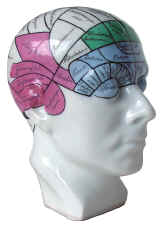 An antique phrenology bust from the Imperial Austrian Porcelain Works, Vienna.  The base of the phrenology bust is marked with the shield emblem of the Kaiserliche Porzellanmanufaktur, Wien, and the date [1]839.

For additional phrenology antiques and other medical antiques, visit the various sections of this web site.