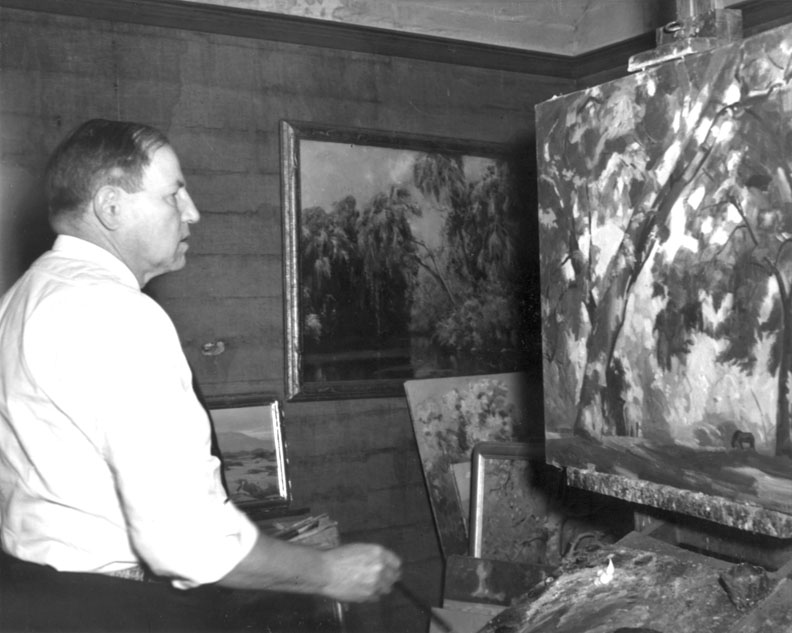 Paul Turner Sargent painting in his studio, which was attached to the Sargent farmhouse, Hutton Township, Coles County, Illinois.    The image appeared in the 6 April 1941 issue of the Decatur (Illinois) Herald and Review newspaper.  The painting on the easel is included below.

ALL IMAGES MAY BE ENLARGED BY CLICKING THEM

Sargent Farm Buildings in the Snow, 1919 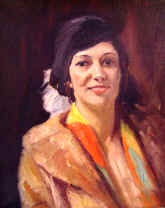 The attending wagon in the foreground holds back-up supply of ------ coal or wood for the bunker on the left rear, while that to the far left is for water barrels...both essential ingredients for operating the boiler.   Note the wooden barrel set upright on the ground with a supply hose going up to the steamer's left side.  The black area on the lower right is a burn resulting from an ash drop or stack embers; the patch is still smoldering with light grey plumes of smoke.  The belt from the tractor's belt pulley/flywheel to the thresher is mounted in the customary figure-eight pattern which keeps the belt in the middle of the pulleys.  The belt is long to create a safe fire distance (at least 50 feet) between the steamer and the highly flammable wheat stalks and chaff.  This an accurate 100 year old painting of a farm steam traction engine at work by an artist who knew how to operate one.

Wet burlap bags were put on the backs of the horses to keep them cool. 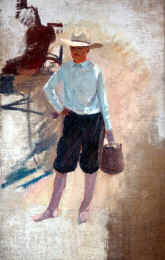 Jack and Trix Feeding from a Wagon, 1922 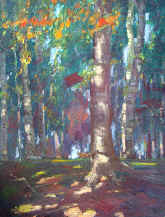 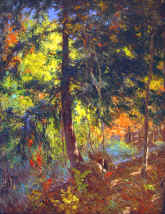 Winter Chores in the Sargent Farmyard, 1926

The woman to the left is Anna Turner Sargent (1848-1924), the artist's mother, and she is probably returning to the main house kitchen entrance with provisions from the hen house or root cellar.   At the middle-background, holding an axe, is the Sargent farmhand Ernie A. Cox (1887-1971).  The identity of the young man unloading firewood from the large sled is unknown. The building is what Sargent called the wood house.  The boy pulling the child's sled is Joe Collins (1908-1969), a nephew of Ernie Cox. The animals are the cat Blackie, the team Jack and Trix, and the collie Lad (Laddie).  The large canvas was exhibited at Marshall Field's, Chicago, in the winter of 1931-32.

This painting has a pathos not typically found in the works of Sargent. What is brought to mind is that life had not really changed much in rural communities for hundreds of years.   And yet, the life depicted here is so very different from that of just a generation-or-so later.  (Electricity was brought to the farm in 1948.)

James and Polly Rennels were among the earliest settlers of  Coles County, Illinois,  and their home dates to c. 1836.  It originally stood in Hutton Township (Section 32),  then, in 1926, the structure was moved to Morton Park, Charleston, Illinois.  Samuel Stephen Sargent (1892-1957), the artist's brother, was in charge of the dismantling and reconstruction.  Only the stone center chimney and the back-to-back fireplaces survive to this day.  For additional information on the Rennels home and this painting, please click here.

This scene in the Smoky Mountains and was most likely painted by Sargent while on a drive to Florida to visit his father. 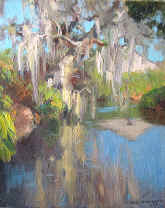 The artist made six trips to Florida to visit his father, John S. Sargent, who was a member of the the Koreshan Unity Settlement and lived in Estero, Florida, from c. 1893 until his death in 1932.

In 1902, Daniel Floweree, a successful cattleman from Helena, Montana, who developed a citrus grove along the northern edge of the Estero River to the east of the Koreshan Settlement, built this hunting lodge on Braman Creek, a tributary of the Estero River.  When he died, in 1912, the lodge became the home of the citrus grove's manager.  At the time of this painting, John C. Horne was the overseer.  A photo of the structure, which was demolished in the 1970's, may be seen here. 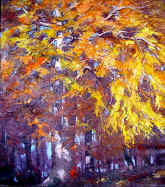 Profile Portrait of a Young Lady. 1929

Though this portrait is dated 1929, the hairstyle is that of c. 1910-1915.  Sargent has apparently worked from an earlier photograph or study.  The straight profile has an air of a Renaissance principessa about it.

During the late 19th century and the early 20th century, The Rocks, located on the western bank of the Embarras River to the east of Charleston, Illinois, was a summer retreat from the heat.   A bath house, waterslide, and boating concession were built in the early 1900s, and The Rocks Park remained a busy and popular recreation area into the 1930s.   The Great Depression and the construction of a WPA swimming pool in Charleston, in 1937, led to the decline of the river resort.

The park was reached by taking the East Harrison Street road out of Charleston and crossing the Embarras on the Harrison Street Bridge.   Once on the east side of the river, a lane on the south led approximately one-quarter mile to the river bank opposite The Rocks.   At this point, an admission was paid and a short boat ride was provided back across the river to the bathhouse on the west side, where the water was deeper and better for swimming.

The painting is of the boat landing on the east side of the river.   In the background, the bathhouse, built above the river's flood level, with its steps down to the river's edge, can be seen.   The inboard motorboat depicted in the painting was a rare sight on this area of the river.   It belonged to Rono White, who sold rides in it and who was the last owner of the park. 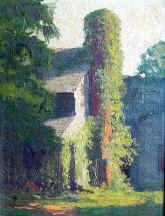 The John Sargent Farmhouse, Hutton Township, Coles County, Illinois, is the place where the artist was born and died.  His studio was an attachment on the back (northside).

The Ajax Stave Tray  Wheelbarrow is illustrated in the 1902 Manning, Maxwell & Moore, New York, builder's supply catalogue,  p. 731, Fig. 5484.  Open-sided wheelbarrows were made to move kegs of fish plates, bolts and nuts, spikes, etc., during railroad track construction and repair.  The Sargent farm apparently repurposed one for hauling firewood from the wood storage house to the farmhouse.

The Salisbury (Hutton) Odd Fellows Lodge, at the northeast corner of Washington Street (Coles Co. Rd. 5) and Carmon St., Hutton Township, Coles County, Illinois, was built in 1903, and it was once the area's community hub.  The main floor was a general store, while the upstairs was used as an Odd Fellows lodge and a space where social gatherings were held.  A fire, in 1957, destroyed the structure.  The home on the left belonged to the Arthur Biggs family at the time of the painting.  The home is still standing and can be seen in this photograph of the perspective as of February 2007.

Note that this is the painting on the easel in the 1941 Sargent studio photo at the top of the page.  Though the painting dates to 1931, Sargent was making changes to it later on as he was known to do.  There are some small differences between the painting here and that shown in the photo.

detail of boy and dog 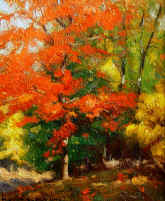 A branch of the Hurricane Creek starts on the Sargent farm.   This painting was shown in the Sargent Memorial Exhibition, Main Auditorium, Eastern Illinois State College, Charleston, October 1946. 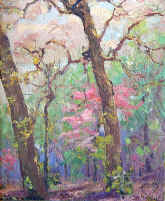 Wood fuel was stored in this building.

In a 1936 note to his brother, Sargent mentions this scene and makes a pen sketch of it. 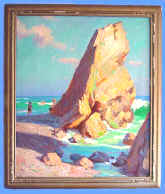 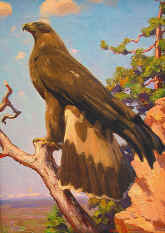 This painting was once placed above Sargent's bed. 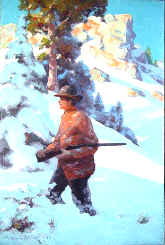 The hunter may be a self-portrait. 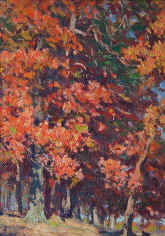 This painting was exhibited at the 1946 Paul Turner Sargent Memorial Exhibit, Main Auditorium, Eastern Sate Teacher's College, Charleston, Illinois. It was again shown at the  Homecoming Memorial-Invitational Exhibition of Paul Turner Sargent at the Sargent Gallery (what had been the Main Auditorium) in Old Main, Eastern Illinois University, Charleston, Illinois.  At the latter show, it was on loan from Mrs. Samuel (Irene) Sargent, the artist's sister-in-law, and it was voted the most popular painting of the 56 in the exhibit.

This painting was exhibited at the 1946 Paul Turner Sargent Memorial Exhibit, Main Auditorium, Eastern Sate Teacher's College, Charleston, Illinois.  Sargent's home in Hutton Township, Coles County, Illinois, is shown in the background.  The artist was born and died here and his studio was an attachment that he added on the back (north side) in 1921. 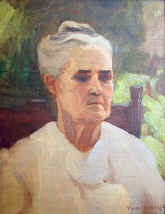 Dr. Robert G. Buzzard, Eastern's president from 1933 to 1956, had installed a campus iris garden on the west side of Fourth Street and to the south of the power plant.  For a c. 1940 photo of the garden looking to the south, as in this painting, please click here.  In a photo from the 1940 Warbler the juxtaposition of the garden to what is now the east side of McAfee is clear.  A photo of President Buzzard in the iris garden is in Eastern's archive collection.  The garden was destroyed when the temporary lab grade school building, a WWII surplus military structure, was moved to the area in the early 1950s.  The author attend first through fifth grade in this building.  The east addition to the Eastern's union and the parking lot on the addition's north side presently occupy the ground.

This painting was in Sargent's studio at the time of his death, and it was shown in the Sargent Memorial Exhibition, Main Auditorium, Eastern Illinois State College, Charleston, October 1946. 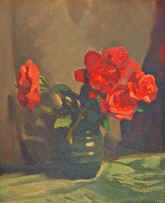 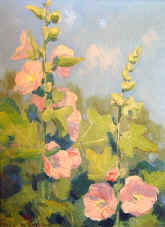 Along the Embarras River, 1942

Cattle Barn and Pond on the Sargent Farm, 1944

Path Among the Sycamores, 1945

This painting was on one of two easels in Sargent's studio at the time of his death, and it was shown in the Sargent Memorial Exhibition, Main Auditorium, Eastern Illinois State College, Charleston, October 1946.

Line of Sycamores Near Carlyle, Illinois, 1945

THE PAUL TURNER SARGENT GRAVE MONUMENT IS LOCATED ON THE SOUTHERN SLOPE OF MOUND CEMETERY, CHARLESTON, IL., ALONGSIDE THOSE OF OTHER SARGENT FAMILY MEMBERS.  THE MARKER IS A GLACIAL ERRATIC BOULDER TAKEN FROM THE SARGENT FARM, HUTTON TOWNSHIP.