All pictures and text on this site are copyrighted ©1982-2020 Alex Peck.  All rights reserve.

Anesthesia in the form of chloroform and ether came into general use in the late 1840s and 1850s.  The surgical patients of the American Civil War (1861-1865) benefited greatly from this development. 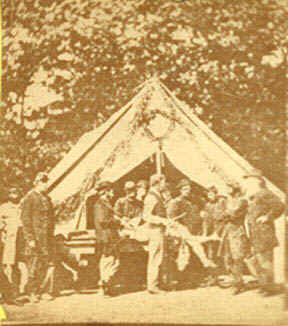 This 1863 photograph of a Gettysburg amputation shows an assistant to the surgeon applying an anesthesia agent to the patient.  Note the large Liston amputating knife is the hand of the surgeon.

The design of this antique chloroform inhalation apparatus was introduced in 1847 by Stevens and Pratt, London.  Edward William Murphy, M.D. (1802-1877), of London, promoted the inhaler and by the 1850s it was known as the Murphy's inhaler.  Note the sponge chamber with simple  leather flap air intake (on the cap) and exhaust valves.  A reference from 1856 states that the Murphy's inhaler was offered in brass at 6s/6d, or if plated, 12s/6d.  This example is the plated instrument.  The exact instrument is illustrated and captioned in the Weiss surgical instrument catalogue of 1863.  See Weiss 1863, pl. XLI, fig. 4.  First generation inhalers, such as this example, are exceedingly scarce instruments. 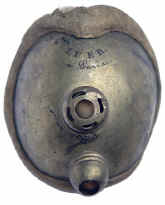 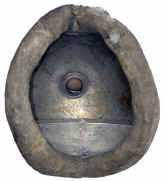 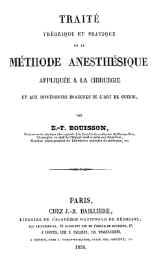 A very scarce first generation 1840s antique anesthesia chloroform inhaler that is hand-engraved:  LÜER, / à Paris.  //  DÉPOSÉ.  The instrument is made of tin and the padded surround is leather stuffed with horse (?) hair.  Note the compartment on the interior side which would have held a chloroform-soaked sponge.  There are two rather simple one-way ball valves that allow air flow into and out of the mask.  A French text on anesthesia, printed in 1850, illustrates and describes this very inhaler.  To my knowledge, there is no other surviving example of this early Lüer inhaler. 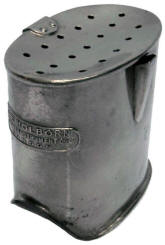 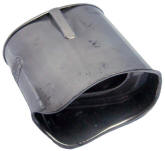 A c. 1890 antique anesthesia inhaler made by The Holborn Surgical Instrument Company, London. 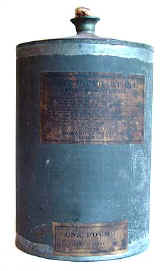 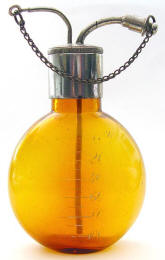 A c. 1900 antique chloroform Esmarch's drop bottle by D. Simal, Paris.  The convex side of the glass is engraved with volume markers from 0 to 100 grams. 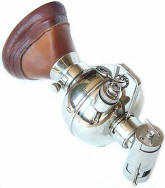 A c. 1880 antique Blake's anesthesia inhaler with wire mesh cone insert.  The mouth of the antique tin ether cone is shaped to cover the mouth and nose.  The gauze for absorbing the inhalant appears to be original. 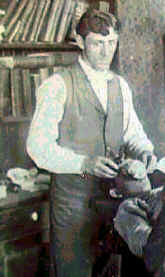 A patient is anesthetized in preparation for a foot amputation.  See Archives, p. 34, for more details about this antique medical photograph. 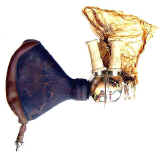 A c. 1890 de Camus anesthesia inhaler with original pig bladder re-breathing bag.  Note the two ports for ethyl-chloride ampoules.  The rubber mouth and nose mask has an inflatable cuff.  This is a fine antique anesthesia artifact.

A high quality antique chloroform inhaler made by Collin, Paris.  This nickel-plated instrument, known as the Tuffier inhaler, was introduced c. 1905.  There are several hand-engraved letterings: H.M. (Hôpital Militaire?), on the middle section, and, on the rotating air valve, O (Ouvrir) and F (Fermer).

For additional antique anesthesia artifacts and other medical antiques, visit the various sections of this web site.