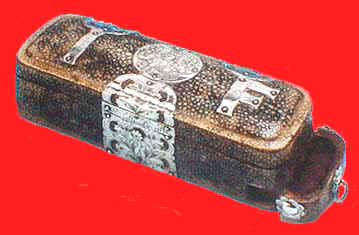 An exceedingly rare and superb c. 1660 antique surgical instrument case with lid and end drawer.  The box is covered in shagreen and embellished with elaborately cut and engraved silver clasp and joints, a silver cartouche bearing the coat-of-arms of the United Barber-Surgeon's Company, and the initials I. (the Latinized- J.) F., also in silver. Two similar boxes with these arms, one of which is also initialed, are in the Wellcome Museum, and there are two examples in the collection of the Barber's Company.  This is the sum total of such shagreen silver-mounted Barber-Surgeon's Company boxes known to this dealer and his contacts.  A much lesser quality box of the type (minus the arms and thought to date to 1672) is in the collection of the Royal College of Surgeons and  it is pictured  in Bennion, p. 62.

The United Barber-Surgeon's Company was first given a Royal Charter in 1540 by King Henry VIII.  According to some references, surgeons were held in such low repute at the time that the Fellowship of Surgeons considered it advantageous to join the more established Barber's Company.  As surgeons gained stature over the next two centuries, friction developed and the union was ended  when the Company of Surgeons was established in 1745.  A Royal Charter of 1800 transformed the Company of Surgeons into The Royal College of Surgeons.

The initials on the surgical instrument case are possibly those of Sir John Frederick (1601-1685), who was elected Master of the Company in 1654 and 1658.  He was a great patron of the guild, giving a 38 oz. silver baluster cup and BP100 towards the building of a new hall.  Sir John  became Lord Mayor of London in 1661.  Other than John Farre, Master in 1670, no other member of the Company had the initials J.F. and was a contemporary of the box.

The coat-of-arms as on the box are described as:

Arms:
Quarterly, first and fourth, Sable a Chevron between three Fleams Argent, second and third, Per pale of the second and Vert on a Spatter [spatula] also Argent a Tudor Rose proper crowned Or; on a Cross Gules dividing the quarters a Lion passant guardant Gold
Crest:
[Upon a Helm on a Wreath Argent and Sable] An Opinicus Statant Or