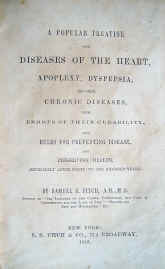 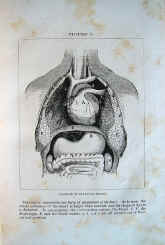 A replica of a 17th century ivory anatomical model of a pregnant woman in the manner of Stephan Zick (1639-1715). 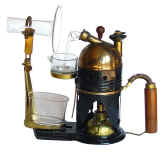 A c. 1880 antique steam medicinal atomizer by Codman & Shurtleff, Boston.  The nose and throat instrument is complete and includes its original wooden box and printed instructions.

A c. 1870s Chassaignac's ecraseur as initially designed for the removal of hemorrhoids.  It came to have other uses, such as the excision of uterine tumors and polypi.  The instrument has its original chain and is in fine working order.  See Tiemann 1889, p. 514, fig. 3663.

A Civil War date lecture ticket from the Medical College of Virginia for the student W.M. McCully, Session 1863-64, to attend the lecture class Theory and Practice of Medicine given by David H. Tucker, M.D.   Dr. Tucker was an 1836 grad of MCV and had a second medical degree from the U of PA.  He also served as a surgeon at Camp Winder Hospital, a Confederate States of America military hospital in Richmond.  Dr. Tucker's autograph is on the back of the card.  There is no record of McCully having graduated from MCV. 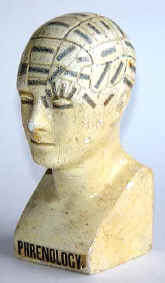 A fine 1870's plaster phrenology bust by A.L. Vago, London.  The plaster is also embossed with Vago's name and the date 1860.  All the original paper labels are present, as is an advertisement on the back dated 1871.  15.5 cm high.

A very fine and rare antique dental pick with an engraved gold finial set with an amethyst.  The shaft is stamped: P. BOUCHE.  Prosper Bouche was a dental instrument maker who was active in New York City from c. 1854 - 1860.  This dealer has never seen an instrument from this obscure maker with a great dental name.  See Edmonson, p. 215. A c. 1890 antique chloroform dropper and case by Mayer & Meltzer, London.  The glass bottle is wheel-etched with a volume scale of 0 to 16 drams.  The spout has a locking pump action.  The bottle comes with its original leather slipcase.

A pewter antique medicine spoon marked J & S MAW / LONDON.  The medical instrument maker Maw went by the name J. & S. Maw from c. 1828 to c. 1860.  The device, known as the Gibson medicine spoon, was invented by Charles Gibson in 1827, and he was given a Society of Arts award  for its design in 1828.  To read an 1842 description of this special spoon, please see this link (bottom of p. 377 and the top of p. 378).  Note that one advantage offered by the Gibson's medicine spoon was the placement of bad tasting medicines, such as castor oil, to the back of the tongue and beyond the taste buds.

A c. 1860 Maw & Son, London, amputation set which has a history of ownership during the Civil War by Surgeon Waters in the 1st Texas Regiment, Hood's Texas Brigade, a unit most favored by General Lee and used by him as his shock troops.  According to a note written in 1907 and accompanying the set, the set was captured...[by Charles W. Marvin]...and most likely taken from the 1st...Texas Regt. from the fact of a descriptive list in the case at the time of capture.  Dr. Charles W. Marvin was a surgeon in the 26th Michigan.

During the final week of the Civil War, the 26th Michigan, a part of the IInd Corps, was first in contact with Lee's forces at Amelia Courthouse on 4 April 1865 as Lee withdrew from Petersburg and Richmond.  The Texas Brigade was assigned the role of protecting the rear of the retreating Army of Northern Virginia (it had done the same many times before, including the retreat from Gettysburg), and it was under continuous attack by the IInd Corps.  Surgeon Marvin may have found Water's set in a medical supply wagon when the Confederate baggage train was captured at Sailor's Creek on the 6th.  [I]n the case at the time of capture... was a just-released POW private's descriptive list (a form releasing the 1st Texas soldier from any monetary obligations to the army), and attached to this is his request for a disability discharge (his right leg was amputated after a wound suffered at Suffolk, Virginia, on 20 April 1863, and he was captured, in November 1863, while attempting to return to Texas) and a medical report.  The medical exam was written-up by Henry W. Waters, the surgeon of the 1st Texas, on 11 March, when this unit was stationed on the eastern defenses of Richmond astride the Charles City Road.  The request has various endorsements up the chain-of-command.  The last to comment as Lee's A.A.G., on 16 March, and he denied the petition  By order of Gen Lee.  The documents would then have returned through the chain-of-command to Surgeon Waters, and they have remained with the set to this day.