A  c. 1860 amputation and trephination set by Gemrig, Philadelphia.  This classic American surgical set contains all of its original instruments, and it is exactly the sort of surgical kit that was for sale in the late 1850s and  in the early days of the Civil War.  Note the deep cuts into the blade of the capital saw; these were thought to aid in clearing the paste mixture of blood and bone dust bad effects of which could slow-down the sawing.  The slats were introduced in England during the 1840s, and they are rarely found in American saws made after 1860.  See Edmonson, p. 254.

An attractive c. 1830s antique dental toothkey with a turned-horn handle that has acorn-shaped finials. The shank has a dog-leg curve. 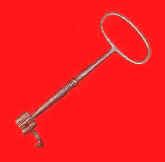 A rare c. 1750 hand-wrought iron dental key with ring handle.  The form is similar to an old lock key and is the source for the term "toothkey." 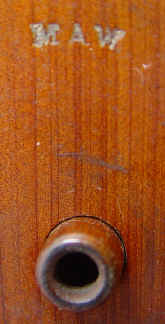 A well-turned cedar antique monaural stethoscope by the medical instrument maker Maw, London.  The stethoscope comes apart and the stem stows within the bell for ease of carrying.  When set-up for use, the end of the stem passes through center of the large earplate and results in a fit to the ear canal of the doctor. The antique medical instrument appears in 19th century Maw catalogues as a portable cedar stethoscope.  This is a relatively early 1860s example. 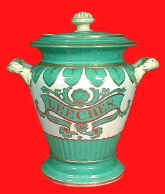 A fine c. 1840 Staffordshire vase-shaped leeches jar.  These jars are found in blue, yellow, and red, besides the green offered here.  Though oftentimes unmarked, this example does have the raised seal of ALCOCK  over a beehive impressed on the underside of the base.  Samuel Alcock & Co. was in business from 1830 to 1859.    See Crellin,  Medical Ceramics in the Wellcome Institute, p. 129-131 and fig. 142. 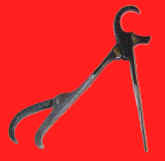 An important c. 1700 combination dental extracting pelican, known as the Douglas lever,  with extracting forceps.  The only similar instrument known to this dealer is that found in Bennion, Antique Dental Instruments, p. 64, fig. 66. 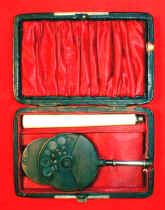 A c. 1880 Loring ophthalmoscope with fitted case, an ivory handle, and condenser lens.

A c. 1800 antique amputation saw with blade marked: EVAN_ [surmounted by a crown].  Evans is a well-known English surgical instrument maker.  This classic Napoleonic Wars era saw has a decorative ebony grip and the brass spine of the blade terminates in a stylized snake head.  A nearly identical saw is illustrated in Benjamin Bell, A System of Surgery.  Vol. IV, PL. XCVIII, Fig. 1.  Troy: O. Penniman, 1804.

An  important and exceedingly rare c. 1860s dental pelican  marked: ATTRACTIF / DE D'ESTANQUE and MATHIEU / A PARIS.  The set has all 9 of its interchangeable jaws, and it is the most complicated mechanical tooth extractor shown in Bennion.  See Bennion, Dental Antiques, p. 38 and 63, fig. 65.