A rare Civil War medical pannier with lid lettered: / Hosp. Dept. The lid slopes, apparently to shed rain, and features a large lockable latch and side lid hooks. The tin body is japanned a deep purple and measures 19" x 12" x 10".  A swivel iron handle is at each side. This is the exact same pannier illustrated in Dammann, Vol. III, p. 49, upper right. Only four other Civil War tin panniers of this pattern are known to this dealer. Though light-weight and waterproof, they must have been rather expensive to make and may date to early in the war. 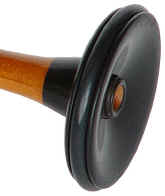 A c. 1880 antique Burrows' monaural stethoscope with rubber percussor built into the earplate.

A Wedgwood commemorate plate for the Medical College of Virginia's centennial anniversary in 1938. The plate features the landmark Egyptian Building, which was erected in 1845. 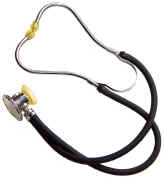 A Hewlett Packard Rappaport Sprague binaural stethoscope.   The body of the double chestpiece is marked:  RAPPAPORT / SPRAGUE / STETHOSCOPE // HEWLETT / PACKARD / WALTHAM / MASS USA.  The Rappaport Sprague stethoscope has been produced by many companies, but HP, through the purchase of the Sanborn Company in 1961, was the most highly sought make and their instruments are considered to be the finest of the 20th century American binaural stethoscopes. 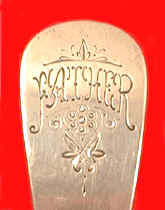 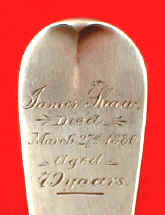 A very fine silver medicine spoon marked: J.E. CALDWELL & CO. / STERLING. Caldwell was a Philadelphia silversmith and jeweler. The top of the handle is jeweler engraved: FATHER. The back of the handle is further engraved in a handsome script: James Shaw. / Died / March 27th 1880. / Aged / 79 years. 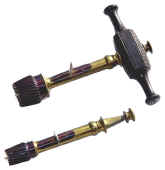 A small bore and a large bore set of c. 1860 antique trephines with a common ebony handle.  The Gault crowns retain their original blued finish.  The centering pins slide and set perfectly.  These antique neurosurgery instruments came from a military surgical set made by Hernstein & Son, New York.

A dated 1904 photograph of a measure of blood pressure with an early cuff sphygmomanometer. 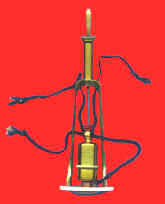 A very rare c. 1860 Sibson's combination percussor and pleximeter made of brass, steel, and ivory. The instrument is discussed and illustrated in Somerville Scott Alison, Physical Examination of the Chest, 1861, London, p. 313.

A c. 1860 antique amputation saw by Luer, Paris.  The handle of this fine bow saw is ebony. 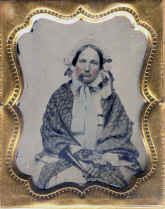 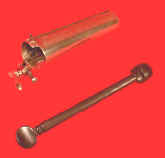 A c. 1850 Charriere trivalve vaginal speculum a developpement of German silver with ebony obturator.  This speculum was introduced in 1837, and there are two variants...one by Charriere (a trivalve model) and the other by Paul Segalas (a quartrivalve model).  The instrument features a unique hinged-tube that is inserted as an almond-shaped oval and expands to a full circle by pressing the two finger grips together.  Consequently, the tip of the obturator is also almond-shaped.  The Tiemann catalogues of 1879 (three illustrations are given) and 1889 list only the trivalve Charriere speculum, but it is incorrectly described as that of  Segalas.  See Velpeau 1847 (Mott translation), pl. XXII, fig. 10, Tiemann 1889, p. 431, fig. 3179, and Ricci, p. 298.

A very fine and early antique ophthalmoscope by Ferguson, London.  The trade label reads: Ferguson, /  Surgeon's /  Instrument Maker /  to  /  St. Bartholemew's / Hospital  /  21, Giltspur Street, Smithfield, London. Daniel Ferguson, surgical instrument maker, is listed at this address for the years c. 1828 to c. 1851.  This instrument, in effect, is the first of the ophthalmoscopes that incorporated a convex lens and allowed for an indirect method of examination, as introduced by Theodore Ruete.