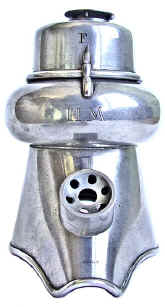 A high quality antique chloroform inhaler made by Collin, Paris.  This nickel-plated instrument, known as the Tuffier inhaler, was introduced c. 1905.  There are several hand-engraved letterings: H.M. (Hôpital Militaire?), on the middle section, and, on the rotating air valve, O (Ouvrir) and F (Fermer).

A c. 1860s antique capital amputation bow saw by Thamm, Berlin.  The handle has ebony scales and the blade is original.

An unusual sterling silver antique moustache guard with hallmarks for Atkins Brothers, Sheffield, England, and date 1887/88.  The antique guard is made to attach to the edge of a teacup or drinking glass.  A must accoutrement for the Victorian hirsute gentleman!

An early 20th century Coffeyville, Kansas, brick works DON'T SPIT ON SIDEWALK brick.  For the story of this brick and its history in the fight against tuberculosis, please click here.

A c. 1800 antique amputation saw marked on the brass spine: EBERLE / PHILAD'[ELPHI]A.  The handsome saw has an ebony handle shaped in the manner of a saw published in 1782 by the Italian surgeon Brambilla (1728-1800).  The pattern  was a  popular one in and , and it was followed into the 1840s.  Charles Eberle was a surgical instrument maker in Philadelphia from 1798 to 1814, and he learned the craft in .  No Eberle instrument is pictured in Edmonson, and, in fact, this instrument is earlier than any other American instrument illustrated in Edmonson.   See Edmonson, p. 16.

A dated 1814 antique doctor's bill from Halifax, Massachusetts, which includes a $20.00 charge for a trepanning.  The original document is a rare early 19th century manuscript mention of a neurosurgical operation. 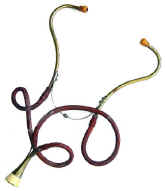 An early 20th century antique binaural stethoscope by Down Brothers, London.  The bell has a genuine ivory cup and the yoke is marked with the broad arrow of the British army. 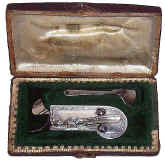 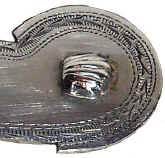 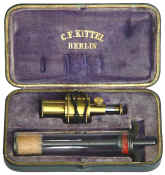 A fine antique bloodletting Heurteloup artificial leech from the maker C.F. Kittel, Berlin.  This mechanical leech, invented, in the 1840s, by Baron Charles Louis Heurteloup (1793-1864), was designed for bloodletting in the area about the eye.  A cut was made in the skin by a round and hollow rotating blade.  The rotation was powered by pulling a cord that wraps around a shaft to which the blade is attached.  Once an incision was made, the open end of the glass cylinder "cup" was pressed over it.  The piston within the cylinder was then raised by turning the winged-nut, thus creating a vacuum in the glass cylinder and drawing blood from the cut.

A c. 1920 Curschmann's percussion hammer that has ivorine scales on the handle.   This antique neurological instrument is stamped: JAPAN. 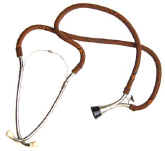 An early 20th century antique binaural stethoscope by Ferris & Co., Bristol, England.  The bell has a finger rest and an ebony cup.  The earpieces are genuine ivory.  Note the unusual stripes in the tubing.

A set of U.S. Army Medical Staff shoulder boards with applied metal old English M.S. letters.  The field is a dark blue and the bars and borders are dead gold with bright gold outlines.  These are a fine pair of Civil War medical insignia.

A c. 1850 three-bladed antique bloodletting fleam by Borwick, Sheffield, and a turned-wood bloodstick (hammer).  The fleam handle has handsome horn scales and each blade is marked: BORWICK / CAST-STEEL.  The bloodstick is an essential accessory for the fleam as it was used to drive the chosen blade.