A very fine c. 1850 Dupuytren’s double-bistoury cache marked: Luer / a Paris. The ebony handle alternates between smooth and checked panels. This complicated antique urological instrument was used during lithotomy to bisect the prostate. A set-screw with scale controls the exposure of the two guarded-blades. See Tiemann 1889, pp. 418-420, and fig. 3127.

A c. 1770 antique bloodletting thumb lancet with original case of pressed-board and wood.  The blade is marked:  LONDON / CITY.  This is the rather misleading stamp of William Brightmore, a Sheffield cutler who was active in the 1770s and '80s.  Note the unusual coffin corners to the tortoise shell covers. 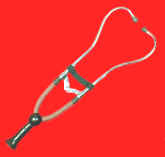 A very fine c. 1880 Cammann binaural stethoscope with bridge marked: CODMAN & SHURTLEFF / BOSTON. The stethoscope is in mint condition. The elastic tension band, which is nearly always missing, is original. The Cammann stethoscope was invented in the 1850s by George P. Cammann, a New York physician. It was the first practical and commercially successful binaural stethoscope. 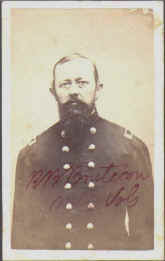 The CDV portrait of Major Bontecou is autographed: R.B. Bontecou / NY Vols.  A panoramic view of Harewood Hospital is featured on the reverse.

A c. 1850 antique amputation saw by Evans, London.  The grip is ebony. 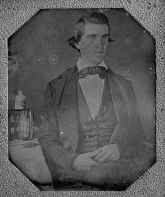 A set of two c. 1880s neurosurgical trephines with horn handle.  The crowns are rather narrow and each stem is maker marked: Tiemann.  The common handle is horn. 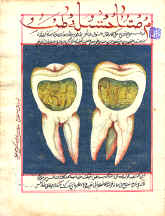 An 18th century hand-illustrated page from an Ottoman Turk dental book showing a molar infected with toothworms. As early as Babylonian times and lasting well into the eighteenth century, it was thought that a toothache was caused by worms. (The theory was disproved by Jacob Christian Schaffer in 1757.) These worms were depicted in art as dwelling with the demons of Hell and feeding upon the sinners. In a cavity on one side of the bisected tooth, Lucifer watches as two worms devour and entrap their victims. In the other half of the tooth, demons lord over a collection of human skulls. Bennion, Dental Antiques, p. 10 shows a very similar scene carved in ivory c. 1750. 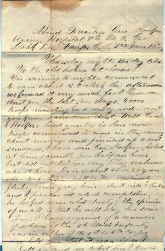 A two-page letter from Marion A. Shafer, a hospital steward in the 7th Michigan Cavalry, dated 18 April [1863], Fairfax Court House. He wonders where the next big battle will be fought!

On 7 July 1863, a few days after Gettysburg, Shafer was a made an assistant surgeon in the regiment.  The 7th Michigan was a unit of Custer's Wolverines.

A c. 1750 iron antique toothkey with ring handle. The key is short at 4 and 1/2 inches long, but the claw is relatively large and brawny. 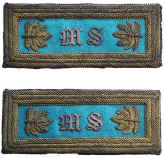 A large and handsome set of U.S. Army Medical Staff shoulder boards for the rank of major, a full-surgeon.  The insignia have applied silver M.S. letters and deluxe extra rich triple-borders.

A very rare pair of c. 1860s Hamon’s obstetrical retroceps marked: Charriere / a Paris. The retroceps were designed to act like a hand behind the foetal head. An interesting common transverse handle of German silver allows the left blade to be rotated and the right blade lateral motion. The retroceps was introduced in 1864 by Hamon of La Rochelle. See Das, pp. 411-413, figs. 500-502.