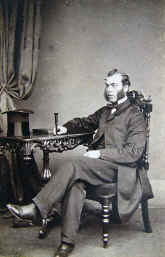 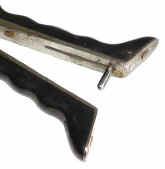 An 1850s pair of first model Elliot’s obstetrical forceps that controls the compression of the blades by a sliding pivot and a series of stops.  See  Hibbard, p. 104, fig. 7.13. 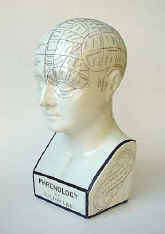 A genuine antique ceramic Fowler phrenology bust that was used by Frank Payne (d. 1939), a phrenologist who practiced in England.  He immigrated to Canada in 1927 and, subsequently, to the United States in 1928.  This c. 1880 bust is shown in a Payne household picture dating to 1952, and it was recently purchased from the granddaughter of Mr. Payne, the little girl seated on the left of her mother.

A c. 1860 antique gynecological (vaginal) speculum and obturator made of sycamore (?).  The obturator was used to apply medications to the mouth of the cervix.  It could also be used to direct a leech to the cervix. 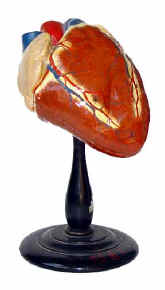 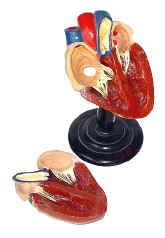 An early twentieth century life-size anatomical model of the human heart. The painted-plaster heart comes apart into two sections and it fits to a wooden base. 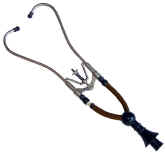 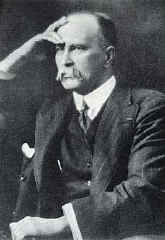 A c. 1870 antique Knight's binaural stethoscope said to have belonged to Sir William Osler, M.D.  The stethoscope descended through the family of Dr. W.W. Francis, a relative of Osler and the cataloger of the Osler library.  The stethoscope is rare, in-and-of-itself, as it has a Ware's bell with screw-in smaller bell.  Some loses to the larger bell are reconstituted in the pictures.

A c. 1880 Blake's anesthesia inhaler with wire mesh cone insert.  The mouth of the antique tin ether cone is shaped to cover the mouth and nose.  The gauze for absorbing the inhalant appears to be original.

A very attractive and well-made c. 1860 antique monaural stethoscope turned from cedar and fruitwood.  The earplate is grooved to hold a rubber ring thus making the stethoscope a percussor.  This uncommon stethoscope is relatively large at 20cm long. 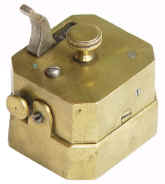 A c. 1860 antique bloodletting scarificator marked: McNAMEE. // RICHD, VA.  Robert McNamee was a surgical and dental instrument maker active in Richmond, Virginia, from c. 1850 to the mid-1860s.  Only one other antebellum Richmond instrument maker, Samuel Sutherland (fl. 1845-1855), is recorded.  No McNamee instruments are illustrated in Edmonson and this is the only example known to this dealer.  See Edmonson, p. 268 and p. 293.

A rare 1824 doctor's bill to The Proprietor of the Negro Woman Dicey from Dr. John Cullen, Richmond, Virginia.  One entry is for bleeding the patient.  Dr. Cullen (1797-1849) is noted as spearheading the  founding, in 1838, of the Medical Department of Hampden-Sidney College, Richmond, which was chartered as the Medical College of Virginia (MCV) in 1854.

A c. 1880 doctor timing a child's pulse with a pulse glass.  Note the anatomical chart on the wall.

A c. 1850 antique cautery iron by Luer, Paris.  This antique hot iron cautery, known as an actual cautery, has a button tip and the handle is ebony.  The instrument was used to burn, sear or destroy tissue.  For millennia the hot iron cautery was heated in a fire and employed against tumors and to close wounds and amputations.  32cm long. 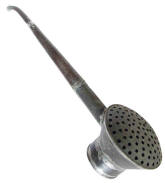