All pictures and text on this site are copyrighted ©1982-2022  Alex Peck.  All rights reserved. 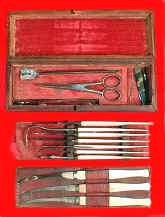 A high quality c. 1840 antique minor surgery set by  MANDER / REGENT ST. [London?], a maker not listed in the standard references.  Of the 14 instruments present, 10 have ivory handles.  A silver cartouche on the lid is hand-engraved: Adams.

A Roberts' monaural antique stethoscope marked: YOUNG / EDIN[BURG]H.  The stem unscrews and stores within the earpiece for ease of carrying.

An antique rectal surgery set by Charles Truax, Chicago.  The set includes a rectal speculum with ebony obturator, three bottles, two syringes (one with a cocaine cannula), a silver probe, and three instruments with ivory handles.  This dealer has not seen a similar proctologic set.  A nearly identical set is illustrated in the Truax, Greene & Co.  catalogue of 1893, p. 1568.

A fine and pristine c. 1880s antique post mortem set by John Reynders & Co., New York.  The set is complete and all the instruments are original.  The saw and large knife and the ivory handle that they share are especially high quality.  The case and the ivory scalpel handles bear the monogram A.M.H., apparently the original owner.  This is a superb American antique autopsy set.  See Edmonson, p. 227. 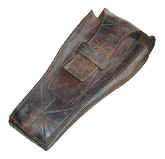 A c. 1870 antique Cammann binaural stethoscope marked: Dr. CAMMANN / STETHOSCOPE // Tiemann & Co.  The owner's name, Dr. John Hatton, is written in several places on the tooled--leather case.  Hatton (1839-1898) was graduated from Medical in 1870, and he practiced in

A c. 1840 thinned-down, late model, antique Laennec monaural stethoscope with plug.  The removable plug was used for listening to heart and voice sounds.  The ivory earplate is missing. 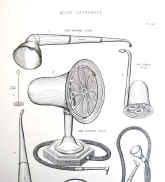 A c. 1860 antique ear trumpet with ivory earpiece.  Attached to the front base of the bell is a metal plaque embossed: WEISS / 62, STRAND / LONDON.  Weiss was the leading surgical instrument maker in London at the time and similar ear trumpets are featured in the Weiss catalogue of 1863.  Note the identical 6 petal flower design of the grill in this example to that shown in the catalogue illustration.  Weiss ear trumpets are scarce. 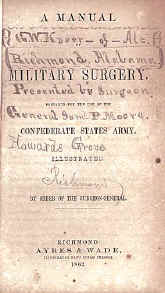 Samuel Preston Moore, A Manual of Military Surgery Prepared for the Use of the Confederate States Army.   Richmond: Ayres & Wade, 1863. The only edition.  With 30 plates and 174 figures, this was the first of only two illustrated military surgical manuals to have been compiled and printed in the Confederacy.  During the Civil War, Dr. Moore was the surgeon general of the Confederate States Army Medical Department.  According to several inscriptions in this book, Moore presented this copy to George W. Kyser while Kyser was serving at  Howard's Grove Military Hospital, Richmond, Virginia.  Kyser saw duty during the Civil War as a hospital steward and graduated from the Medical College of Virginia in 1865.  Dr. Kyser practiced in Richmond, Alabama, after the war.  This genuine Confederate surgical manual is a remarkable artifact of the Civil War. 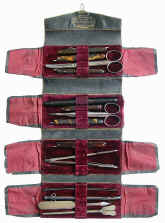 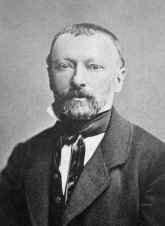 A  vintage Littmann binaural stethoscope made by Cardiosonics.  Cardiosonics, Inc., of Cambridge, Massachusetts, was co-founded by David Littmann, M.D., the stethoscope's inventor, and it was in business from 1963 to 1967 when  the company was sold to 3M.  Dr. Littmann (1906-1981) was a noted cardiologist and teacher at Harvard Medical School.