A handsome c. 1750 antique amputation saw with a massive ebony handle.  Note the decorative casting of the frame.  The overall length is 18.5 inches. 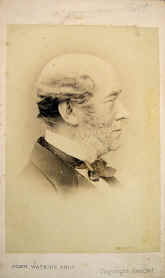 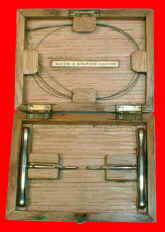 A c. 1900 cased Gigli saw by Mayer & Meltzer, London.  The set includes two handles and two sets of cutting wires.  In the 1890s the Gigli replaced the chain saw as the resectioning instrument of choice.  It has the same sort of handles as a chain saw, but a wire is used instead of the chain.  The wire made for a finer and quicker cut.  It also did not clog as easily as the chain, it was easier to clean, and it was cheaper to replace.

A cased 1870s hypodermic syringe with two needles.  Note that the mounts to the needles are hard rubber. 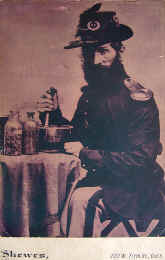 A Civil War U.S. Army hospital steward.  This image was taken, along with others using the same model, to show various regulation uniforms, insignia, and hats of the Union forces.

An ebonized-wood monaural stethoscope with uniquely-shaped chestpiece. The chestpiece fits to the tube by a slip-friction joint and was made to be easily removed. It may be that it was meant to be used as a percussion thimble. The instrument is known as the Dutch stethoscope. 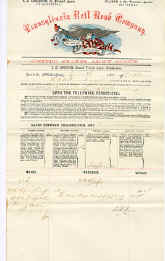 An attractive Pennsylvania Rail Road Company shipping receipt form for UNITED STATES ARMY GOODS. The document is date 3 June 1864 and records the shipment of Thirteen Boxes Hosp[ital] Supplies from Philadelphia to Harrisburg. The colored masthead incorporates an eagle and flag with the motto: THE UNION AND THE CONSTITUTION! A Dr. Rhoads signed for the goods in Harrisburg. 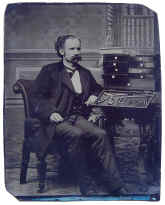 A c. 1860s tintype photograph of a dentist with dental instruments.

A c. 1860s-70s operating/examining table made of oak.  Note the numerous configurations that can be made and the wood-slat stirrups. 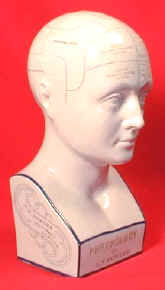 A rare c. 1860 ceramic phrenology bust by Lorenzo N. Fowler, 337 Strand, London. The address is that of Fowler's London publisher William Tweedie.  The sentiments are delineated and labeled in detail. This is the most popular of the nineteenth century phrenology heads. Though later models, including reproductions abound, this is a genuine early example.  Bennion, p. 289, fig. 20, shows an identical bust.

A  ticket to a January 1862 fundraiser for the Louisiana Volunteers, a Confederate unit, to be held at St. Mary's Academy, Baton Rouge.  The reverse of the ticket was inscribed as a memento by a Union soldier who was a patient at the Academy when it was later used as a hospital.  The writer probably found the ticket on the premises and sent it home in a letter.  Baton Rouge was captured by Union forces in May 1862, and, but for about a month in August of the same year, the city was held by the Federals for the rest of the war.