All pictures and text on this site are copyrighted ©1982-2022  Alex Peck.  All rights reserved.

A c. 1900 doctor's office with a Morton-Wimhurst-Holtz Influence Machine (static electricity disk generator), a stand holding an x-ray tube over a patient, and the doctor.  The 1901 Wm. H. Armstrong & Co, Indianapolis, catalogue lists an 8-revolving plate generator similar to the one in the photograph at $350.  That was quite a sum in those days.

A superb c. 1850s axilla clinical thermometer with ivory scale marked: MCKESSON & ROBBINS 91 FULTON ST. NY.  This maker is not listed in Edmonson, though the company is known to me by surviving catalogues.  The glass tube is much more angular than the usual axilla thermometer.   The instrument's original case is present, and it contains the notation: Given to Dr  Mansfield / in Memory of / Dr. P.J. McMahon / Aug. 1st 1877.   See  Tiemann 1889, p. 4, fig. 1014. 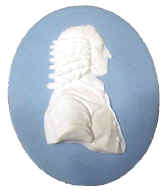 A very scarce c. 1780 Wedgwood memorial portrait of Dr. John Fothergill (1712-1780), English physician, botanist, naturalist, a founder of the Medical Library at Pennsylvania Hospital, and a close friend of Benjamin Franklin and Josiah Wedgwood.  Dr. Fothergill was in the forefront in the study of diphtheria, migraines, trigeminal neuralgia (Fothergill's disease), and of angina pectoris...recognizing its connection to restriction of the arteries.  In 1744, he wrote about the use of mouth-to-mouth resuscitation in reviving the apparently dead (drowned).  Upon Fothergill's death, his extensive seashell, coral, and insect collection, in part gathered by Sydney Parkinson on Captain Cook's first voyage, was purchased by Dr. William Hunter.  Franklin, with whom, in 1774, Fothergill cooperated in an attempt to avert the split between Parliament and the American Colonies, remarked at his passing, I think a worthier man never lived. For besides his constant readiness to serve his Friends, he was always projecting something for the Good of his Country and of Mankind in general.  Gilbert Stuart, in 1781, painted a posthumous portrait of Fothergill, who, as a Quaker, would not sit for the artist.  The painting is now in the collection of the Pennsylvania Academy of Fine Arts.  The back of this old jasper ware  cameo image is impressed with Dr. Fothergill's name and with the Wedgwood mark of c. 1780.  A second example of this Fothergill  likeness is in the Wellcome Institute collection.  See Crellin, p. 289. fig. 479.

A fine antique spiral Petit tourniquet.  The frame and screw are brass, and the strap is in fine condition.

An antique c. 1880 pair of Anderson's obstetrical forceps made by Dick, Glasgow.

A finely carved c. 1840 antique prosthetic hand.  Nail holes at the wrist once fastened a leather strap for attaching the hand to the arm.  A unique piece of orthopedic apparatus with a folk art quality. 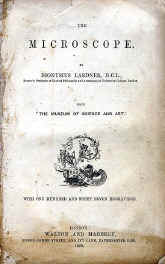 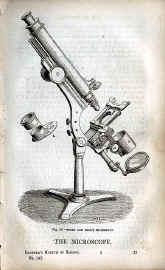 A copy of Lardner's The Microscope (London:1856) that is signed and dated: Dr. Josiah Curtis / Surg. U.S. Vols. / Oct. 1864. Knoxville Tennessee. Dr. Curtis (1816-1883) graduated from Jefferson Medical College in 1843. During the Civil War, he served as a brigade surgeon, including duty as surgeon-in-charge at Cuyler Hospital, Philadelphia, and Medical Director at Knoxville. There are five citations to Curtis in the Medical & Surgical History; one accounts his participation in the hip amputation of a seaman wounded while serving on the U.S. frigate Congress during an engagement with the Confederate iron-clad Merrimac.  Curtis settled in Nashville at the end of the War. In 1872 he took part as surgeon, microscopist, and naturalist, in the U.S. Geological Survey of what is now Yellowstone Park...this book may well have been carried by Curtis on this assignment. The next year he became chief medical officer of the U.S. Indian Service.

A rare c. 1890s capital amputation saw with hard rubber handle scales. As aseptic surgery became the rule, the use of hard rubber represents the final vestige of 'ebony' handles for surgical instruments . By the mid-1890s surgical handles were all-metal. The antique saw is nine inches long and was made by George Tiemann, New York. It is thought to be a variant of Rust's saw.

A c. 1900 photograph of Dr. James Law (1838-1921), America's first academic veterinarian, before faculty and students in the Cornell Veterinary College lecture hall.  Note the Auzoux anatomical model of a horse.