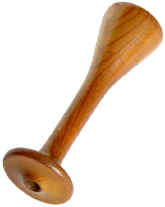 An antique monaural stethoscope simply identified in the 19th century surgical instrument catalogues as a cedar stethoscope.  The raised area around the hole in the earplate is a distinctive and unusual feature. 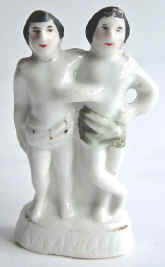 A c. 1860 ceramic souvenir figurine of the original Siamese Twins Eng and Chang.  The charming and primitively molded sculpture was probably made in and is labeled: SIAM ZWILLING [TWINS].   The piece stands 8.5 cm high, and heads and loin cloths are hand-painted.   The conjoined twins took several tours to , and this antique souvenir may have coincided with the late 1860s trip that was to include here for more information on the history of the original Siamese Twins. A relic from an age when the Siamese Twins were on display and gained world-wide fame.

A very rare and exquisite c. 1880 antique Loane's smallpox vaccinator with porcupine quill body and silver fittings.  Five needles of this antique vaccinator are exposed by turning the distal end.   Dr. Thomas Loane, MRCS, b. 1843, is assumed to be the inventor.  He was the Public Vaccinator for the West Ward of Mile End (East End of London) until, in 1888, he was dismissed for intoxication while on duty.  The antique smallpox vaccinator is illustrated in the 1888 catalogue of the London maker Arnold & Sons.  The quality of the materials and workmanship is first rate. 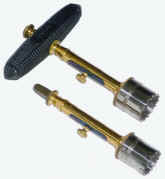 A Weiss c. 1850 antique trephine with both narrow and wide crowns.  The slots in the crown blade were thought to ease the clogging of the neurosurgery trephine caused by the mixture of bone dust and blood.  Note the decorative formed horn handle with rosette finials and the impressed name:  WEISS // LONDON.  The instrument with its distinctive handle is illustrated in the Weiss catalogue of 1863.

An Auzoux anatomical model of the human heart and lung.  It is complete and self-contained; it is an independent piece and not a part of a larger ensemble.  The heart, itself, is made of three parts.  The model appears to have rarely been taken completely apart before…the pin holes are very tight.  Auzoux offered at least four sizes of the human heart.  This is the life-size model and it is in very fine condition.  The anatomical model is an excellent piece that displays well. 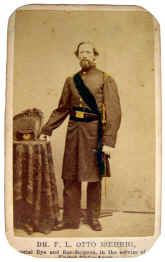 A Civil War date CDV of F. L. Otto Roehrig, Acting Assistant Surgeon, U.S. Army. The photo has the backmark of Edward Hipple of Philadelphia.  Dr. Roehrig is identified by a caption below the image that states: DR. F.L. OTTO ROEHRIG/ Special Eye and Ear-Surgeon, in the service if the United States Army.  This specialist designation has not been seen given to any other Civil War surgeon.  Roehrig is shown full pose in uniform with a tinted-green sash worn across the chest indicating that he is the ‘officer of the day.’ A Model 1840 Medical Staff sword is attached to his belt and his kepi is on a side table.  There is one citation to Roehrig in the Medical and Surgical History.

A c. 1880 Shrady's saw for subcutaneous section of the thighbone.  The instrument was made by Tiemann and has an unusual angular handled cannula within which the saw blade is drawn back-and-forth.  This is a specialized saw used...for malposition in case of osseous anchylosis of the hip joint.  The saw was invented by George Frederick Shrady (1837-1907), a prominent New York surgeon, a co-founder of the Charaka Club, and the founder of the Medical Record.  Shrady saw service in the Civil War, and there are over a dozen citations to him in the Medical & Surgical History.  He attended President Grant during his final illness.  See Tiemann 1889, p. 111, fig. 1636, and Rutkow, ORp 130.

A c. 1850 bloodletting spring lancet marked: KBLONER. The lancet has an unusually large blade and an ingenious second spring that retracts the blade once it is fired. An adjustable guard controls the depth of the cut. 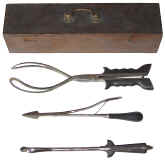 A cased-set of c. 1850s Dr. Elliot's obstetrical forceps (first pattern of 1858), a perforator, and Dr. Bedford’s blunt hook and guarded crotchet. Each instrument is in fine condition and marked Tiemann.  Note that the Dr. Elliot's obstetrical forceps has a sliding and tapered pin built into the inside of one handle.  The inside of the opposing handle has a series of holes of varying diameter.  Moving the pin adjusts the closure of the forceps. This first pattern Elliot's forceps is not pictured in any of the Tiemann catalogues of the 1870s and '80s.  For an image, see Shepard & Dudley's catalogue of 1886, p. 785, fig. 4621, and Hibbard, p. 104, fig. 7.13.  Das, pp. 370-71, fig. 463, shows the later modified Elliot's.  This pattern perforator is not found in the various Tiemann catalogues or, as of yet, elsewhere.

A c. 1800 antique dental elevator known as a tongue of a mouse (langue de carpe).

A fine pair of c. 1890 antique clinical thermometers by F. Darton, London, in their original leather case.  The exquisite set includes an axilla (bent) and an oral thermometer.

A c. 1900 antique Cammann binaural stethoscope known as the University Stethoscope.  This is the last iteration of Cammann stethoscope models.  The example offered is in very fine condition.

A c. 1830 high quality antique knife and fork set  with original case.   The set was made for an invalid (someone with swallowing difficulties) or a person without teeth, as the single knife incorporates three different blades for the fine cutting of food.  The masticating knife can be taken apart for cleaning and is held together by a silver compression ring.  Each knife blade is marked:  JOSEPH RODGERS & SONS / CUTLERS TO HIS MAJESTY /  No 6 NORFOLK STREET / SHEFFIELD.  Rodgers received its royal warrant from King George IV in 1821.  A similar but slightly later knife is pictured in Abel Domenech, Exhibition Knives of Joseph Rodgers & Sons - The Samuel Setian Collection, p. 155. 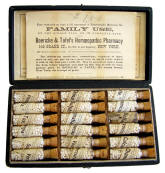 An antique Lilienthal rib guillotine made by Tiemann, New York.  The instrument was used to cut the first rib and it was invented by the highly regarded thoracic surgeon Dr. Howard Lilienthal (1861-1946), of Mount Sinai Hospital, New York City, c. 1920.

An antique bloodletting bowl from St. Bartholomew's Hospital, London.  The antique pewter bleeding bowl has a flattened front for placing tightly against the patient and below the cut;  this plane is marked: ST B H and twice 9. The 9 probably refers to the ward number in which the bowl was used.  (St. Bart's bleeding bowls numbers 2, 12 and 20 are also known.)  The opposite side of the Georgian medical bowl has a simple C-shaped handle.  The interior wall of the bowl is divided by a series of engraved rings and corresponding stamped numerals denoting various volumes of blood from 2 to 24 ounces. Ref: Symons Collection, No. 377, The Royal College of Physicians, London.

A c. 1860 antique bullet screw and probe by Charriere, Paris.

An antique bent clinical thermometer marked: Geo. Tiemann & Co. Pat. June 12 ‘77. The patentee is Frederick A. Stohlmann, one of the then owners of Tiemann & Co., and the US patent number is 191,897.  This antique thermometer comes with its original leather protective case. See Tiemann 1889, p. 4, fig. 1015.

An antique Quain's monaural stethoscope that unscrews at the center to reverse the bell for ease of carrying.  The earpiece has an unusual slight extension of the sound hole to better fit the ear.

A G.I. severely wounded at Iwo Jima is prepared for surgery. 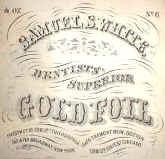 A c. 1870s package of S.S. White gold foil for filling a cavity.  Several sheets of the original gold foil are present.

An unusual c. 1820 bloodletting spring lancet with two built-in knife blades.  The instrument is held together by rivets and friction fittings: no screws are used. It is thought to have been made in Lancaster County, Pennsylvania.

A very well-made c. 1930s binaural stethoscope by Kettner, Berlin.  The flexible  tubes are unusual in that they are metal, not the typical rubber, indicating that the instrument was made to be used in extreme temperatures.  The tubes, the chest piece, the diaphragm, and the earpieces detach by bayonet fasteners.  This handsome instrument has a definite Art Deco look to it. 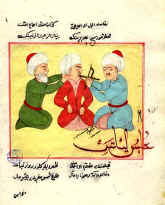 A facsimile hand-illustrated page from an Ottoman Turk book on dentistry.  The doctor is using a bow-drill upon the patient.  Such bow-drills continued to be used well into the 19th century.