The operating theater at Bellevue Hospital, New York, c. 1885.  The demonstrator is the English surgeon Sir William MacCormac (1836-1901).  Dr. MacCormac, who served as surgeon-in-chief to the Anglo-American Ambulance in the Franco-Prussian War, also gave a lecture at Bellevue on his experiences with military surgery.  George A. Peters, M.D., is in an arm chair in the left forefront.  Directly behind Dr. Peters is seated the young Dr. Austin Flint IV, and sitting to his left and wearing a skull cap is Lewis Albert Sayre, M.D.

A superb c. 1840 gynecological speculum hand-engraved:  Dr. PROTHEROE SMITH'S / SPECULUM UTERI / Ferguson, Maker.  Protheroe Smith was a prominent London obstetrician and the founder, in 1842, of the Hospital for Diseases of Women (Hospital for Women), Soho Square, the initial such specialist hospital in England.  He is also noted as the first physician to use chloroform in childbirth in England.  Ferguson, established  in 1822, was a London maker of medical and surgical instruments.  The instrument is of exhibition quality.  See Ricci, pp. 527-528. 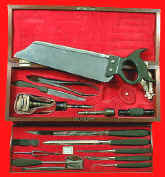 An 1850s general operating set of amputation, trephining, ophthalmic, and urological instruments by Tiemann, New York.  The antique surgical set is unusually compact.  Note, for example, that the tourniquet must be taken apart for storage.  (The tourniquet strap is in the upper lid and the buckle is in the lower lid just above the handle to the capital saw.)  The handles are ivory and the three large knives and the trephine share the same handle.  The Parker capital saw is uniquely diminutive and its total length is only eight-and-a-half inches!  The set includes a very rare Moses' bullet extractor, which was invented by Isaac Moses, a U.S. Army surgeon during the Mexican War and the Civil War.  This is the first example of the extractor known to this historian. The instrument is illustrated in the Tiemann catalogues and mistakenly called Moses' bullet extractor. 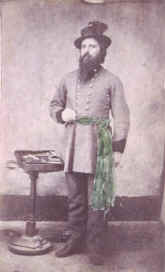 This Civil War  cartes-de-viste is a most interesting photograph of a Confederate surgeon.  Note the ivory-handled surgical set on the table.  The  surgeon is holding an amputation knife. 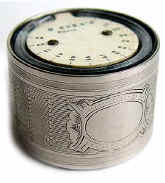 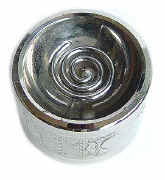 A rare and fancy c. 1870 surface clinical thermometer with ivory Celsius scale marked: H BON.le / Paris.  A coil of mercury within a concave reflective housing is exposed on the bottom of this antique thermometer.  The metal outer frame is hand-engraved, and the original leather carrying case is present.

An ebonized-wood and horn Baunscheidt’s Lebenswecker (life-awakener) marked: LINDEN / CLEVELAND. This is a counter-irritation device which was invented in the 1850s by Carl Baunscheidt (1809-1874). It has a series of small needles that have been previously coated with Baunscheidt’s inflammatory oil.   A spiral spring was pulled-back and powered the needles into the skin.  The idea was to create a secondary inflammation to relieve a primary inflammation. John Linden promoted the use of the Lebenswecker, and he wrote a manual on Baunsheidtism. A photocopy of the 1877 edition of the manual is included. See Tiemann 1889, p. 122, fig. 1693. 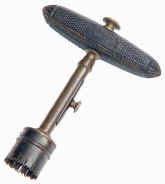 A c. 1850 antique trephine by Weiss, London.  The slots in the crown blade were thought to ease the clogging of the neurosurgery trephine caused by the mixture of bone dust and blood.  Note the decorative formed horn handle with rosette finials and the impressed name:  WEISS // LONDON.

A c. 1750 hand-forged iron toothkey. The bow handle has decorative finials. A fine example of what is probably a one-off from a blacksmith’s shop.

A very fine c. 1850 solid silver spring lancet with the inside of the removable panel impressed: GEMRIG / PHILA [DELPHIA]. The other side panel is professionally engraved: H.R. Caslow, M.D. / Halifax, Pa. For the moment, Dr. Caslow remains to be identified. There appears to be a tradition of such inscribed silver lancets being given in the Philadelphia area by preceptors to their favored students. The internal steel workings of the lancet retain nearly all of their original bluing.

A superb c. 1860 sixth-plate ambrotype of a young dentist with his extensive set of dental instruments. 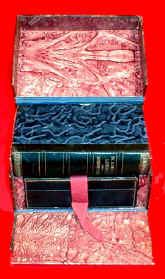 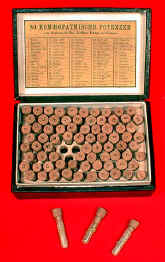 A fine c. 1875 antique homeopathic set, complete with outer case, 900+ page text Dr. Arthur Lutze's Lehrbuch der Homoopathie (Cothen: 1874), and box of 80 labeled bottles with corks numbered for reference to the listing on the interior of the lid.