Artifacts in this section have been sold.

Here are two antique surgical sets that have their respective lid brass cartouches  jeweler engraved: S.W. Vance, M.D. Samuel Warren Vance (d. 1910) practiced in Connersville, Indiana. He has an entry in the Medical & Surgical History of the War of the Rebellion as a pension examiner.

The superb and all original c. 1855 amputation set by Max Wocher, Cincinnati, is in a rosewood case. The surgical instruments are in pristine condition, with the steel retaining its original polish and the ebony handles their original workshop fresh finish. This cased set has some quirky aspects, such as very thin amputation knives, an unusual capital amputation saw, and a type of Petit tourniquet not known to this dealer. The address 6th bet[ween]. Vine and Race on the trade label pasted to the interior lid indicates, according to Edmonson, that the set was made in 1855.   See Edmonson, p. 249.  This pre-Civil War set was apparently never used.

The original buyer of such amputation sets had the option of purchasing a matching trephine set.  As it so happens, the mate trephine kit to the Vance amputation set survives and after years of separation the two have been reunited.  The trade label with address is identical to that found in the amputation set. 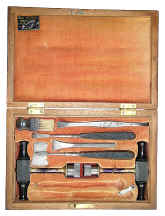 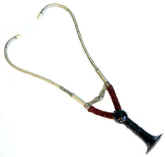 An exceptionally rare and important early 1850s initial model antique Cammann binaural stethoscope.  Tiemann / N[ew]. YORK is stamped on the obverse of the yoke.  This mark indicates a pre-1855 Tiemann date.  The reverse is delicately hand-engraved:  Dr. Cammann's / Stethoscope.  Note the relatively short  tubes, when compared to later Cammann's stethoscopes, and the velvet sleeves.  The large and flaring chestpiece was turned from ebony wood, and the earpieces are ivory.  This the first commercially available binaural stethoscope, and it was invented by George Cammann, of New York City, in 1852.  George Tiemann, also of New York City, is believed to have been the manufacturer that Cammann sought-out to make the instrument.  To my knowledge, only three other examples of the prime Cammann stethoscope are recorded.  They are at the Wellcome Medical Museum, London, at the National Museum of Health and Medicine of the Armed Forces Institute of Pathology, Walter Reed Army Medical Center, Bethesda, and one in a private collection.  This is the very instrument pictured in Edmonson, p. 106, figs. 138 and 139. 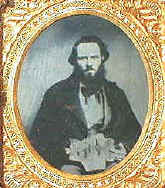 A c. 1860 sixth-plate tintype of a doctor holding an opened pocket set of minor surgery instruments. This medical photograph is in fine condition and comes with its original case. 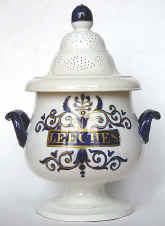 A fine c. 1840 Staffordshire pedestal-shaped leeches jar.  The jar is 33 cm high, and the beehive lid has a decorative pattern to the air holes.  A similar jar, apparently by the same potter, is pictured in Bennion, p. 281, fig. 12.  Also, see Crellin,  Medical Ceramics in the Wellcome Institute, p. 129 and fig. 239.  The jar and lid of this bloodletting antique are original to each other, and the blue decoration is not faded.  This is a great example of a 19th century leech jar. 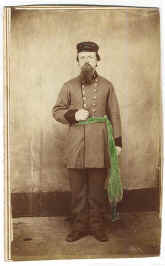 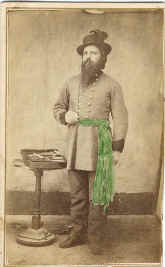 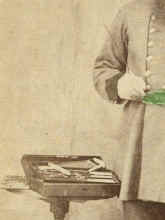 A pair of Civil War  cartes-de-visite of  District Indian Territory Confederate surgeons, both with tinted emerald green sashes.  The top CDV is of Lee M. Alexander, Surgeon, C.S.A., and the Medical Director of the District of the Indian Territory (Oklahoma).  The lower image is most probably Walter Thompson Adair (b. 1834), surgeon to the 1st Cherokee Mounted Rifles.  Dr. Adair came from an illustrious family and was part Cherokee. (His brother was William Penn Adair, a delegate from the Cherokee Nation to the Conference of Congress.)   Note the ivory-handled surgical set on the table.  (An example of the Parker amputation saw shown in the surgical set is illustrated here.)  The surgeon is holding an amputation knife. These images are thought to be the finest CDVs of Confederate surgeons. 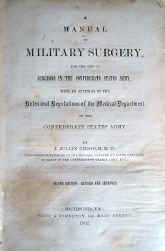 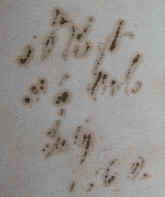 J. Julian Chisolm, M.D.,  A Manual of Military Surgery for the Use of  Surgeons in the Confederate States Army.  Richmond: West & Johnston, 1862.  Second edition.  The covers and spine are original and show wear consistent with use in the field.  The front flyleaf is signed in pencil:  C.H. Gorman / Assistant Surgeon C.S.  and, in a second hand,  M.L. Leach.  The rear flyleaf has a decayed ink inscription that reads:  30th Regt. / AL Vols. / July / 1862.  Dr. Claiburn H[arrison?] Gorman was mustered at Talladega into the 30th Alabama Infantry on  31 March 1862.  He graduated from the Medical College of Georgia, Augusta, in 1854, and lived in Alpine, Alabama.  Dr. Morgan L. Leach served as an assistant surgeon in the 9th Michigan Cavalry and was from Du Plain, Michigan.  The two respective regiments had been in proximity to one another often in the Civil War campaigns from Chattanooga to Bentonville, and Leach may have acquired the manual around the time of the surrender of the Army of the Tennessee at Greensboro, North Carolina, on 26 April 1865. 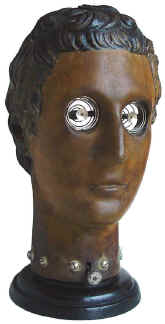 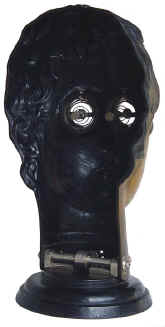 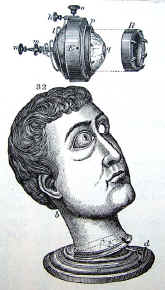 A rare c. 1870 classical head antique ophthalmophantome that was made by Josef Leiter (1830-1892), Vienna, Austria.  It is signed on the pivot armature: LEITER / IN WIEN.  The mask phantom was invented ca. 1827 by Dr. Albert Sachs (1803-1835), an ophthalmologist practicing in Berlin, and it was used to teach ophthalmic surgery with practice upon cadaver's eyes or pig's eyes (similar in size to the human eye and readily available).  The orbs are held in place by spring-loaded concave disks.  Both of these porte-oeils (eye carriers) are present.  The set-screw at the center of the throat allows the head to be tilted back to various positions.  This Augustan style bust is the most desirable of the various types of antique ophthalmo-phantomes, and it was offered and illustrated (Tafel IV, 6) in Leiter's catalogue of 1870.  An identical Leiter Augenphantom is in the collection of the Science Museum (Wellcome), London.

A  c. 1750 bloodletting spring lancet with compartment to hold three blades and its antique leather carrying pouch. The identical mechanical fleam is on display at the Wellcome Medical Museum, London. The Wellcome’s example and that here are missing the detachable two-piece cocking lever, which had to be removed to fire the instrument. This extra step added to the difficulty in using the instrument and probably explains the reason that it is so scarce. The only complete example known to this collector is at the Smithsonian. It is later and not as nicely made. See Davis, p. 55 (the description of the firing sequence is mistaken) and fig. 121. 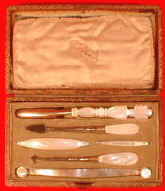 A c. 1780-1800 high quality gentlemen’s antique dental hygiene set in a finely gold-tooled red leather hard case. The set consists of a toothbrush (a period replacement), two scalers, a folding toothpick, a spool for holding silk floss, and a tongue scraper with silver blade. The spool is made of decoratively carved mother-of-pearl, and the other five dental instruments have carved mother-of-pearl handles. The interior of the lid to the case has a mirror, which retains its original silk covered padding.

A c. 1860 ceramic antique phrenology bust by Lorenzo N. Fowler, 337 Strand, London. The address is that of Fowler's London publisher William Tweedie.  Prior to setting-up a permanent office in London on Fleet Street, in 1863, Fowler used Tweedie's establishment as the center of his English business.  This is a genuine early example of the iconic antique Fowler phrenology head.  ~11.5" tall. 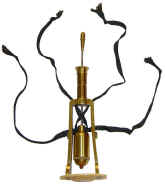 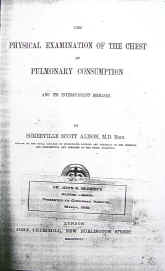 A very rare c. 1860 Sibson's combination percussor and pleximeter made of brass, steel, and ivory. The original case bears the maker's logo of Ferguson, London.  The instrument is discussed and illustrated in Somerville Scott Alison, Physical Examination of the Chest, 1861, London, p. 313.