A very rare c. 1850 antique mouth speculum marked: CHARRIERE.  The mechanical movement of the speculum oris is ingenious.  A set-screw holds the blades at the desired diameter.  Charriere, of Paris, was one of the finest of the 19th century French instrument makers.  The name of the company changed, c. 1866, to Robert et Collin.  This is the first example of this particular instrument encountered by this dealer. 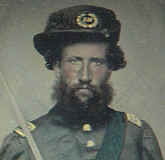 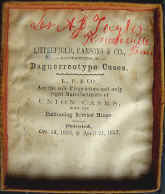 A very fine tintype of a Union surgeon in full regalia.  Note that he is holding a Model 1840 Medical Staff sword upright and is wearing a sash, which has been tinted-green...the Medical Department branch color, across his chest to indicate that he is the officer-of-the-day.  The original Union Case manufacturer Littlefield, Parsons & Co. label is present, and upon this label is written in red ink:  Dr. A.B. Taylor / Knoxville / Tenn.  Assistant Surgeon A.B. Taylor served in the 12th Indiana Infantry during the Civil War, and, late in 1863, this unit was in Knoxville. 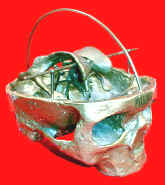 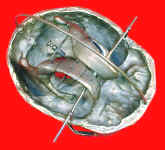 A c. 1880 bronze model of the cranium depicting the relationships between the bone structure and the brain ventricles.  A paper label on the front reads: PILLING.  A rod at the rear is stamped: PILLING PHILA.  The firm George P. Pilling  was established in 1854, and it is a well-known Philadelphia medical equipment company.  See Edmonson, p. 261.  A fine and unusual neuroanatomical model. 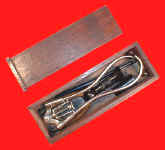 A fine c. 1880s Knight's binaural stethoscope with bridge marked: CODMAN & / SHURTLEFF // BOSTON.  The antique stethoscope comes with two interchangeable turned-ebony bells---the flared bell for general sounds is attached and the narrow bell for localized sounds is to the left.  Accompanying the stethoscope are a Flint's percussor and pleximeter, both in hard rubber.  All three instruments are housed in their original sliding-lid wooden box.  See Tiemann 1889, pp. 6-7, figs. 1042, 1046, and 1050. 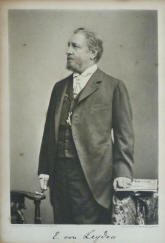 A c. 1890  heliogravure portrait of Dr. Ernst Viktor von Leyden (1832-1910).  Von Leyden was a student of Ludwig Traube and he holds a Traube percussion hammer in his right hand.  An example of an actual Traube hammer is shown. 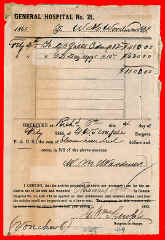 A February 1865 Civil War voucher from General Hospital No. 21, Richmond, for the purchase of 42 gallons of cider and 64 dozen eggs to feed wounded prisoners.  The cider charge was $12 per gallon and the eggs were priced at $10 per dozen...the total bill came to $1,100.  This is a clear record of war inflation in the last months of the Confederacy!  Also called the C.S.M. Prison Hospital, the facility held some 600 Union wounded prisoners in May/June 1864.  The document is signed by G.W. Semple, Surgeon in Charge.  Besides this late war hospital duty, George William Semple, Surgeon P.A.C.S. (Provisional Army Confederate States), served in the 32nd Virginia Volunteers, among other posts.  There are two citations for him in the Medical & Surgical History.  Semple (1812-1883) was an 1834 graduate of the University of Pennsylvania, and he practiced in Hampton, Virginia.  More history available on this doctor. 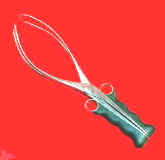 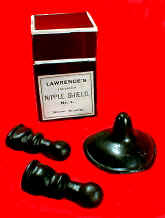 A  c. 1860 boxed LAWRENCE'S / IMPROVED / NIPPLE SHIELD / NO. 2 / New York.  The shield and two attachment nursing nipples are made of natural rubber which has now indurated.

A c. 1870s lifting-backing metacarpal amputation saw by E.M. Hessler, Cleveland.  The handle of this surgical instrument is ebony. 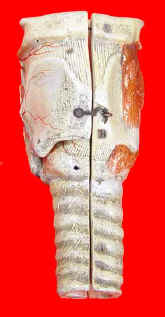 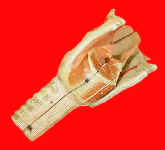 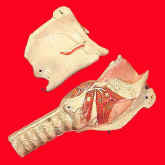 An 1850s capital amputation saw by Brinkerhoff, New York.  Note the unusual and decorative gilt brass handle.  Surgical saws of this type are known to have been used in the Civil War.

Three c. 1890 antique urological lithotrites.  The topmost lithotrite was made by Vicary & Son, Glasgow, while the middle instrument is from Collin, Paris.