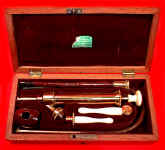 A  well-crafted c. 1850 antique enema and vaginal douche set by Wood, Manchester.  The pump knob and the two rectal pipes are genuine ivory.  The instruments are superb and the set is complete.

A c. 1900 antique binaural stethoscope marked: FANNIN DUBLIN / MADE IN ENGLAND.  The bell is ebony. 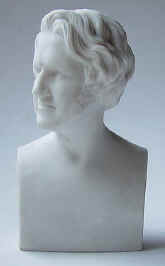 A Victorian Parian ware bust of Dr. James Young Simpson (1811-1870), Chair of Midwifery at Edinburgh and an early advocate of anesthesia during childbirth. 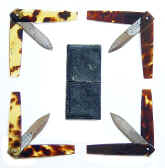 A c. 1860 set of four lancets by Weiss, London.  These instruments are known as a thumb lancets due the manner in which they were held and pushed into a blood vessel.  Tortoiseshell guards protect the blades.  The antique bloodletting lancets come with their original four-partition leather case.

A good quality c. 1880 antique hypodermic syringe set that includes two needles.  Such sets were typically used for cocaine and morphine injection.   This very set was featured in an episode of the TV program CSI that first aired on 6 January 2005.  The storyline centered around the murder of a Sherlock Holmes impersonator.  Holmes injected himself with a 7 per cent solution of cocaine, which the great detective found ...so transcendently stimulating and clarifying to the mind...

A c. 1860 antique Petit spiral tourniquet by Gemrig, Philadelphia.  The frame and screw are brass. 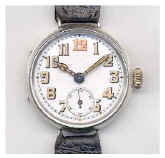 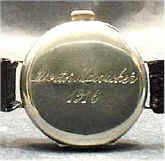 A handsome WWI military-type wristwatch with case hand-engraved: Doctor Macvicker / 1916.  The enameled dial is all original, and the case is sterling silver with 1915 import marks for Birmingham, England.  The 15 jewel movement is in excellent working order, sets smoothly, and keeps good time.    This is a genuine WWI date antique doctor's watch. 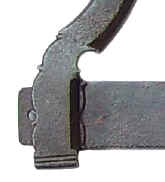 A very early capital amputation saw from Jacobean England.  The antique saw is impressed with the H mark of Robert Hobbs, London, fl. c. 1606-1621.  Instruments by Hobbs are believed to be the earliest extant English maker-marked surgical instruments.  John Woodall, The Surgeon's Mate, London: 1639, illustrates an identical Dismembering saw in a plate titled: Instruments for the East India Company's chest.    25" long.  The instrument comes from the estate of an elderly New England couple who were interested in early American ironwork, and it is believed that the saw has been in North American since colonial times.  This is precisely the surgical saw that one would expect to have been used  by Giles Heale,  a member of the Barber-Surgeon's Company and the ship's surgeon on the Mayflower, and by Samuel Fuller, the surgeon of Plymouth Colony.  No other example of a Hobbs saw is known to exist in any American collection.  25" long.

An interesting dated 1832 dental receipt from W. Planton, Dentist, Philadelphia, for placing a set of teeth with spiral springs containing twenty five teeth at six dollars each.  The total charge for the set came to $150.00, which equaled five times the average worker's monthly pay at the time!  Other charges were made for replacement springs and for adapting & altaring [sic] the old set.

A c. 1890s photograph of the Syms Operating Theater, Bellevue Hospital, New York.  The patient appears to be undergoing a gynecological operation; the black cloth-wrapped legs are held-up and spread by vertical rods fixed behind each knee.  An assistant sits at the head of the wooden operating table with his back to us, and he is administering the anesthetic.  Two cans of ether are visible at his right side.  Note that the operator and others are standing in a large pool of blood on the floor, which has apparently missed flowing into the square tub placed directly below the patient's legs.   The demonstrator is William Mecklenburg Polk, who at the time was Professor of Obstetrics and Diseases of Women and Children, University of the City of New York.  He held many other posts, including Curator and Visiting Physician at Bellevue Hospital, Visiting Physician, Emergency (Lying-in) Hospital, Consulting Physician at St. Vincent's Hospital, and he became the first dean of the Cornell University Medical College in 1898.  Dr. Polk was a graduate of Virginia Military Institute (VMI) in 1863, and an 1869 medical graduate of Columbia.  The author or numerous articles on gynecological topics, Dr. Polk maintained an office at 7 East 36th St., New York.

A c. 1850 antique bloodletting lancet by Evans, London.  This instrument is known as a thumb lancet due the manner it was held and pushed into a blood vessel.  The covers to the blade are tortoise shell. 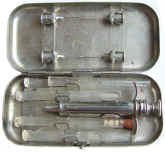 A c. 1900 antique hypodermic syringe set with case engraved: Elizabeth B. Brandt.  Included are four needles and four glass vials.  The outfit may have been given as a nursing school graduation present. 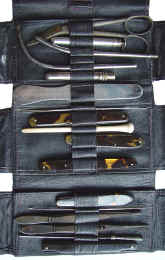 A c. 1870 antique minor surgery pocket set by Joseph Gray & Son, Sheffield.   The set includes a most unusual and diminutive antique hypodermic syringe that has mounts, plunger, and case in sterling silver---all exhibiting a jeweler-made quality.  The overall length of the antique syringe is only 3"---rather dainty and impractical.  Also, note the fine silver tongue depressor and caustic holder and the ivory-cased trocar and cannula.

A pair of c. 1830 antique Denman's obstetrical forceps marked: WEISS / LONDON G[eorge] R[ex].  The forceps have no pelvic curve.  The handles are ebony and the metal has been plated at a later date.  The instrument is illustrated in pl. XXXIV of the 1863 Weiss catalogue. 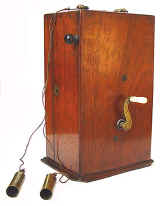 A high quality and unusual c. 1860 hand-powered magneto electric machine for treating nervous diseases and whatever else ailed one.  The antique quack instrument stands upright in a well-grained mahogany case, and a door opens to reveal a series of attractive brass gears.  The crank has a bone and brass handle, and the push-pull regulator comes with an ebony knob.  There are two brass handgrips. 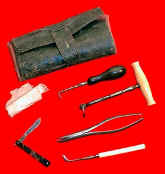 A fine c. 1850 antique American dental wallet with ivory-handled toothkey and gum lancet, an elevator, an extracting forceps, and a folding scalpel.  The  key has a lever  system for locking the rotating bolster and claw.