A c. 1848 antique amputation set by Snowden, Philadelphia, with a Civil War history of use in the Confederate States Army.  S.C Gleaves / 45th Rgt is scratch-engraved upon the lid brass cartouche. The antique Civil War surgical set belonged to Dr. Samuel Crockett Gleaves (1823-1890), of Wytheville, Virginia, an 1848 graduate of the University of Pennsylvania.  Shortly after graduating, Gleaves establish a practice in Wytheville.  At the outbreak of the Civil War, Samuel C. Gleaves became the lead surgeon of the 45th Regiment Virginia Infantry, part of General John B. Floyd's Brigade, organized at Wytheville in May 1861.  For an extensive documentation of the life of Dr. Gleaves, please see the Gleaves Family Website (note the links at the bottom of the page).  Also associated with the surgical set are Confederate surgeons James A. Templeton, A.B. Fitzpatrick (1831-1906), Hobson Clark (1832-1905), Thomas Zadock Offutt (1829-1911), ? Carter, W.B. Robertson, and Barzilla H. Hoyt.  The antique Civil War surgical kit is complete.

A very fine antique hypodermic syringe set by Arnold & Sons, London.  All metal fittings are silver-plated and the glass barrel is wheel-etched with volume markers.  The set is complete two needles and even a spare plunger survives.

A Hewlett Packard Rappaport Sprague binaural stethoscope in presentation case.  The stethoscope is in mint and unused condition and comes with its original set of accessories and manual.

A rare pair of c. 1800 Hamilton’s forceps by Alexander Still, Edinburgh. This forceps was introduced c. 1793 by James Hamilton, Jr., M.D., or by his father, Alexander Hamilton, M.D., both professors of Obstetrics at the University of Edinburgh. The right forceps has a hinge that allows the handle to swing to the right…by which it is easily introduced, while the patient lies on the left side. The forceps also has a very distinctive upward curve to both fenestrated blades. The lock is the English type. The handles are ebony. The forceps was nickel-plated c. 1870, thus extending its use into the anti-septic era. Alexander Still was an Edinburgh surgical instrument maker from the 1790s to the 1830s. See Das, pp. 245-248, and figs. 301-307.

A 19th century leeches jar marked: Hirudines.  This German Westerwald salt-glazed pottery leeches jar has four parts:  the outer body; an inner vessel with perforated wall; a lid; and an iron clamp to hold the lid in place.  Hirudines is the Latin word for leeches.  To find such an antique leeches jar with all of its original parts is special.

An exceedingly rare 1770s dental instrument incorporating two different kinds of pelicans, both sharing an endless screw adjustment. The instrument was made by John Rogers of Newton, Massachusetts.

A c. 1900 photograph of medical students studying auscultation.  The center figure is using a binaural stethoscope. 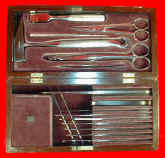 A c. 1880 post mortem set by Shepard & Dudley, New York, and retailed by Goldthwaite, Boston. All the original fifteen instruments are present and each is in fine condition. The rosewood case has a fancy brass lid cartouche which is engraved: G.E.Bill, M.D. / Waltham, Mass. Dr. Bill graduated from Harvard in 1880 and is known to have practiced in Waltham. This set is larger and finer than the typical post mortem set. 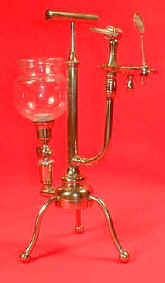 An unusual c. 1880 brass eye wash apparatus with glass reservoir (a replacement), pump, adjustable nozzle, eye screen, and catch basin. The handle to the pump is maker marked: ROBERT ET COLLIN (Paris) on one side, and patent marked: PILLVERISATEUR SALES GIROUS BREVETE G.D.C., on the other side. The nozzle control is stamped: LAV. This handsome instrument stands upon a tripod base and is ten inches tall. 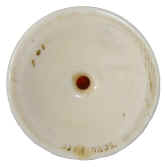 A fine c. 1880 antique monaural stethoscope turned from ivory.  The stethoscope is rather long at 8.5".  The earplate is marked DOWN BROS.,  a 19th century London maker. 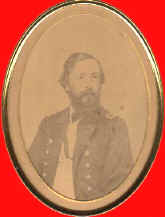 A Civil War date albumen photograph of Wentworth Ricker Richardson, Surgeon U.S. Navy. Dr. Richardson was born in 1829 in Portland, Maine, and received his medical degree from Dartmouth in 1852. He entered the Navy at the outbreak of the Civil War in 1861, and he died in 1864 at Key West while in the service. Surgeon Richardson is shown in uniform and he is identified by a period inscription on the back. The image is five inches by seven inches and it is in its original frame. 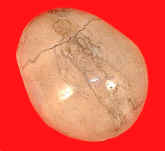 The calvarium of a Caucasian male age 18 to 20. The crown of the calvarium is scrimshawed with a nude male full-figure with chest and abdomen opened and in part-dissection. Above the cadaver and to the right is a human skull. Above the skull, in turn, is a spread-winged eagle with a banner in its beak. The banner reads: LT. POTTER / BALTIMORE. This refers to Lt. Thomas Mawney Potter, who was an U.S. Navy assistant surgeon from 1839 until 1854 (the scrimshaw dates to this period). Potter became a full surgeon in 1854 and a medical director in 1871. He retired in 1876 and died in 1890. A native of Kingston, Rhode Island, Potter was an 1834 graduate of Brown and an 1838 medical graduate of the University of Pennsylvania. The scrimshawed-calvarium is a unique piece of American medical folk art.