All pictures and text on this site are copyrighted ©1982-2021 Alex Peck.  All rights reserved. 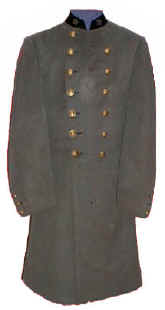 A rare Civil War Confederate  uniform with collar in the black branch color of the Confederate medical department.  The star insignia indicates the rank of major (full surgeon).  The original buttons have on their face the state seal of Virginia.  The backmark of the buttons is that of Mitchell and Tyler, the leading Civil War military outfitter in Richmond.  This Confederate surgeon's uniform was once in the renowned Gunter Collection and it is ex-Chicago Historical Society collection.  The noted expert on Confederate uniforms has personally examined this coat and affirmed in a written appraisal that it is a genuine Confederate coat in the tailoring style of the Richmond area. 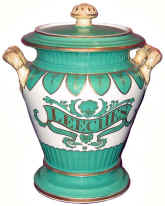 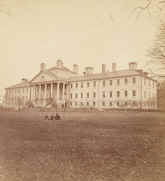 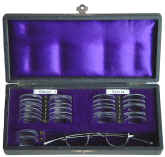 A c. 1910 trial lens set with fourteen concave and fourteen convex lenses. The fitted-case also holds a pair of trial lens frames. The set is complete and in very fine condition.

A fine and scarce 16th century antique silver-mounted shagreen surgical and bloodletting instrument case.  Such distinctive shagreen boxes are associated with the United Company of Barber Surgeons as several bear the coat-of-arms of the London guild.  For one major example, please see this link.  The silver clasp is engraved:  J. Fowler / Stanton-Drew.  Fowler is an old family name in Stanton-Drew, and, certainly, it is a lineage that is contemporary in time and place with the 16th century case.  The small English village of Stanton-Drew is located 8 miles south of Bristol, in Somerset, and it appears in the Domesday Book of 1086.  The interior velvet lining bears the impression of the antique spectacles that were stored in the box during the 18th century. 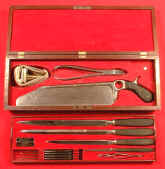 A fine c. 1860 Civil War amputation set with instruments marked: KOLBE. The set is complete with twelve instruments and nine have ebony handles. The capital saw is a rakish variant of the sturdy Satterlee saw, and the metacarpal saw is unusually small. The case and red lining are in superb condition. The lift-out tray retains the paper label: D.W. KOLBE, / MANUFACTURER OF / SURGICAL & ORTHOPAEDICAL / INSTRUMENTS / 32 & 34 South Ninth Street, / PHILADELPHIA, Pa. Kolbe was at 32 South Ninth Street from 1859 to 1866. Edmonson makes no mention of the street number 34, but this most likely was an expansion made due to the increased business of providing surgical instruments for use in the Civil War. See Edmonson, p. 255.

A 1830s toothkey marked: ADLE’S / PATENT. The key has an unusual swivel bolster and a sharp angle to the shank. Due to an 1836 fire at the United States patent office, the early records are incomplete and the patent for this unique instrument has been lost. The handle is of turned-ebony. 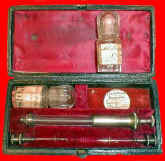 A c. 1870 syringe set by Ferguson, London. The syringe has silver fittings and the glass barrel is hand-engraved with volume numbers. Two small glass bottles and stoppers-all wheel cut with facets-are included in the case. One bottle has a label for morphine, the other for belladonna. The set is complete and all original.

A c. 1860 antique Baunscheidt Lebenswecker with original box and label of instructions.  This German-made instrument of ebony and horn was imported and sold by John F. Galster, Cleveland, Ohio.   The Life-awakener was a popular counter-irritation device that  was claimed to cure many ailments, such as ...a regulator of the circulation of blood...headache...diseases of the eye, ear...hemorrhoids...inflammation of the throat [and] brain...syphilis...yellow fever...[and] green sickness.  A series of sharp needles are located at the head of the instrument, and these needles were forced into the skin, which had been prepared with a special oil that would cause a rash, by pulling and releasing the spring-loaded tail.

An early  pewter Mudge's inhaler  that is stamped with the mark of Henry Joseph, a London maker active c. 1780.  The flexible mouthpiece is missing, as is typical.  See Bennion, p. 257, fig. 7, for a later example.  A fine example of antique medical pewter.

An early nineteenth century pill roller with base impressed: No: 27. / GLUCK IN ZWONITZ [?]. The piece is hand made, including the screws. The wood (maple?) frame is dovetailed and has a rich patina. The most interesting feature is the grooves of the cutting plate and striker; usually made of brass, occasionally of wood, these are made of pressed horn. This is the first such example known to this collector.

A  two-piece monaural stethoscope as introduced c. 1837 by Charles J.B. Williams (1805-1889), who, during his day, was a London authority on consumption and diseases of the chest. The earpiece can be removed and slipped into the chest bell when listening to the heart and voice. This copies the functions of the earlier Laennec, but makes a much less cumbersome instrument. Bowditch 1846, pp. 243-244,  illustrates and discusses the introduction and use of this stethoscope. See Weiss 1863, pl. XLII, figs. 16a and 16b.

An  antique amputation set by Windler, Berlin.  All of the original surgical instruments are present and in fine condition.  The handles are ebony.

A c. 1880 hard rubber over brass  hearing aid marked: TIEMANN & CO. [New York].   Antique hearing aids in hard rubber are quite rare, as are those carrying the mark of a major American medical instrument maker.